The disc golf course is a very popular recreational facility at the park. The local disc golf association does a great job of maintaining the course and holds frequent competitions. The course is considered as one of the best in the state! 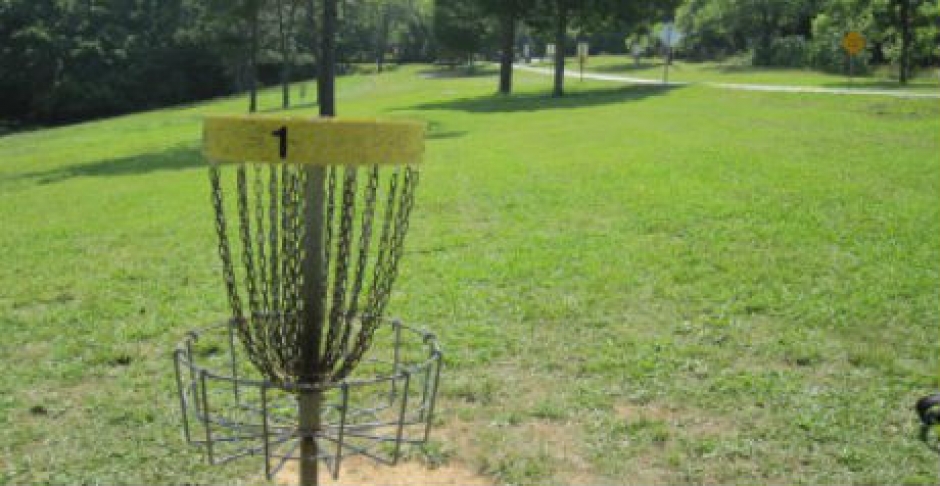 A Brief History of Disc Golf in the Tri-Cities

The beginnings of Disc Golf can be traced back to many locations. California, Virginia, and other  areas of the country have recollections of students and Frisbee enthusiasts inventing a form of golf using  flying discs. Some may have seen the directions stamped on the bottom of Wham-O Frisbees that read,  “Flip flat, flies straight. Have fun, invent games”. Regardless of who was first or where they started  playing, the game was beginning to develop a following.

Ed Headrick worked for Wham-O in the 1970’s and invented a catching device that he believed  would legitimize the game and provide a standardized target for players. He called his creation the  “Pole Hole” and set out to convince local parks in California to install Disc Golf courses. As more and  more parks said yes, Ed decided to reach out farther with his idea.

In the late 1970’s, Headrick approached the Tennessee State Parks Department in the hopes  that they would install courses in the state parks. Three parks said yes; Meeman-Shelby in Memphis,  Cedars of Lebanon in Lebanon, and Warriors Path in Kingsport. After installation at Warriors, a group of  local disc golfers decided to form a club and host tournaments. Lead by current Disc Golfer Magazine  Photo Editor John Whinery, the Lakefront Disc Golf Club was formed. In 1985, the club hosted its first  professionally sanctioned event, the Lakefront Open.

Since 1985, the Lakefront club has held hundreds of tournaments, from casual, monthly  tourneys, to large pro events that draw players from all the surrounding states. In 2022, the Lakefront  Open celebrated its 37th year, making it the longest running pro event in the state of Tennessee. Over  those 37 years, disc golf locally has seen many changes and expansions.

In 1995, Winged Deer Park in Johnson City gave the club permission to build a 9-hole course  there. Several years later, the course was expanded to 18. In the early 2000’s, an 18-hole beginner  course was installed at Borden Park in Kingsport by the Rotary Club, designed by Billy Owens. A private  course in Greene County was installed by Jerry Harmon on his property, known as Harmon Hills, which is  a Top 100 course on UDisc, the leading disc golf app. Other local courses include Persimmon Ridge in  Jonesborough, Tn. (18-holes), Steele Creek Park in Bristol, Tn. (18 holes), Laurel Run Park in Church Hill,  TN. (9 holes), Sugar Hollow Park in Bristol, Va. (18 holes), also a UDisc Top 100 course, Coomes Center in  Abingdon, Va (9 holes), and Mt Carmel City Park in Mt Carmel, Tn (9 holes).

Several local colleges and universities have installed courses as well. East Tennessee State  University (9 holes), King University (9 holes), and Virginia Highlands Community College (9 holes with  expansion to 18-holes in the planning stages) in Abingdon, Va, Milligan University (9 holes) all have courses on campus with Milligan offering Disc Golf as part of its sports teams, offering scholarships for  disc golf as well. Milligan is the first college or university to offer scholarships to play disc golf for the  school. Interested students should contact Tim Barr, coach, and program director, 423-367-7334.